I wish I can tell you that I have adjusted to Spanish mealtime schedules, but two and a half years later, I’m sad to say that at times I still find it a struggle. It’s been a long process, and it’s not easy specially when there are about 5 parts of eating during the course of the day. It’s hard to keep up, but I’m getting a lot better specially when I have two boys who have completely adjusted to Spanish eating habits.

Having dinner at 9:00pm (or 10 in the summer) still feels a little alien to me, how things have changed compared to a few years ago when the kids had dinner at 7:00pm the latest. Their diet have also changed, no more to quick meals and junk food. The availabilty of ready meals are not as popular compared to back in the UK, and usually you will only find a small section of this in the supermarket . Of course we do not completely deny ourselves from junk food, but it’s much more of a treat nowadays than a daily thing.

I read an article today about school lunches from around the world, it’s interesting to see what the rest of the world offer its children on a daily basis. 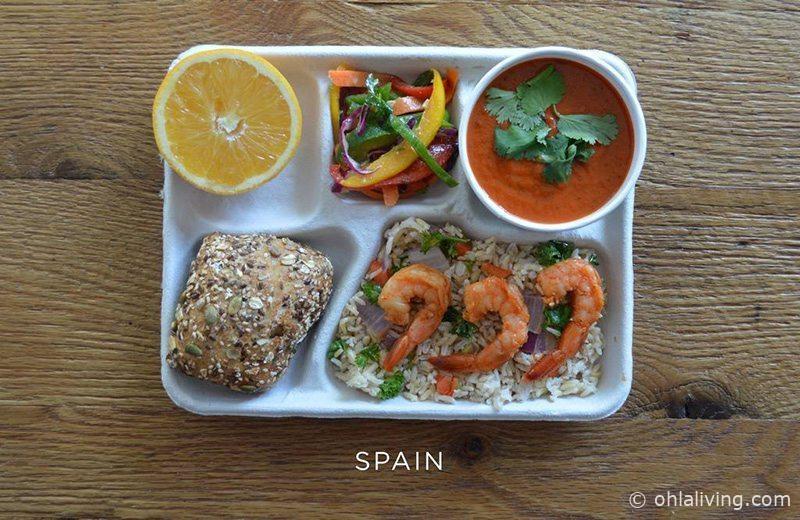 Growing up in the Philippines, I can remember a usual breakfast would consist of rice, fried eggs, dried fish, tocino or longganisa and tomatoes. That changed when I moved to the UK, but once in a while I still treat myself to a traditional Filipino breakfast, even though I still get the odd comment from my husband about eating rice first thing in the morning along with eggs and sausages…

My taste have changed over the years but sometimes I am still drawn to the food that I enjoyed from my childhood. Very similar to my boys now, who still enjoy the occasional fry up, oats, cereals, baked beans and sausages, but they also have no problem in enjoying a typical Spanish meal.

My boys attend a private school, and with the long schedule of 9-5 pm it’s easier to stay in school for lunch. My 7 year old specially took a few months to adjust.  I remember a time when he refused to go to school because it was ‘lentils day’. From a 7 year old point of view, I can see his problem, but it didn’t take too long before he finally accepted that there is nothing he can do about it. He’s still not a fan of lentils but at least now, I don’t get a half an hour whine about it!

Below is a screenshot of my boys typical Spanish school menu, you will probably recognise many items, such as tortillas, paella, longanizas, spaghetti and so on. They also give the children a balance of beans (lentils, lentejas and chickpeas, garbanzos). Fish and seafood are also served on a weekly basis. Side dishes such as bread and salad also accompanies the main meal, and desserts can be yoghurt or a piece of fruit.

Since moving here, we have certainly change the way we eat for the better. McDonalds and junkfood are only there for treat days, whereas back in the UK, my eldest son would probably visit a chip shop on his way back from school as well as having snacks in between!

My 7 year old is specially more open minded in trying different things, here are a couple of photos of him enjoying several plates of seafood!

A plate of grilled sepia (Cuttlefish) in lemon and olive oil

Mom, wife, web/graphic designer and illustrator. I am also the author of Ohla Living a personal blog where I share my lifestyle, travel, days out and creative thoughts. I'm a collector of anything quirky addicted to coffee, cocktails, the beach & VW Kombis.